The different kind of Eye-Reading 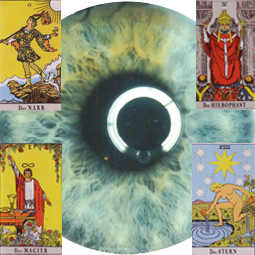 What is Tibetan Pulsing Iridology
The Eye Reading?

What - on earth - has the Tarot to do with the Nervous System?
An eye reading is at the start of working with Tibetan Pulsing. As they say, the eyes are the mirror of the soul. That is true and not only that. The eyes show the script for “the role you play in life”.
Tibetan Pulsing Iridology ist very different from common iridology. It's using a different view on the map of the nervous syste,. This is further explained below. 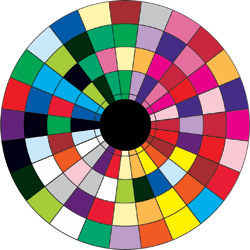 Mirror of the Soul

Tibetan Pulsing Iridology - The Eye Reading
An eye reading is at the start of working with Tibetan Pulsing. It's at the beginning of individual sessions. It can also be used for slef-inquiry as a separate reading, in person and online.
As they say, the eyes are the mirror of the soul. That is true and not only that. The eyes show the script for “the role you play in life”.
This "map" of the eye reading is based on fundamental physiological and psychological knowledge as well as the wisdom behind the picture language of the Tarot. These pictures show the archetypes of our inner programming. Our moods and our expression come from those archetypes.

We use this Tibetan Pulsing Iridology to explore conditioning by distinguishing between “who am I really?” and “how do I function?” This gives you an understanding of what truly belongs to you and what doesn't, it shows why you suffer from certain conditions and suggests solutions on how to overcome this.

This Iridology evolves out of a holistic and specific understanding of the nervous system. Therefore, this eye reading differs entirely from common iridology. It's a different view on the map of nervous system. It looks at the causes of physical, mental or psychological illness and psychosomatic conditions.

The Tarot in the Nervous System

We all share the ability to perceive picture language. Picture language is what our dreams are made of. The subconscious can read and absorb pictures without understanding intellectually in words.
Human beings of all cultures and times have expressed their experiences in drawings or paintings. We find that on ancient cave walls and ornaments. Those pictures often show the story of daily life or the perception from within, the inner world of experiencing. When we look at aspects of such pictures, they may not be very easy to grasp and yet, some undersanding or resonance often happens. We can feel a deeper meaning even though we do not understand intellectually.

At some point in time, supposedly in Egypt, someone had the idea to create a comprehensible sequence of pictures to express the development of human consciousness. That sequence finds itself today called the Tarot. Our inner picture world, our private home entertainment facility contributes widely to what we call memory. From the picture files we form a big part of "the story of me", who we (believe) we are. That is why we sometimes act acording to some very old imprint without even thinking about it.
In Tibetan Pulsing the place in the nervous system where we have a disturbing or burdensome influence can be touched directly with it's according picture, symbolised by the Tarot cards.

Origin and Meaning of Tarot
Over time and in various cultures and through many minds involved, the interpretation of the Tarot pictures and picture language itself changed and coloured different aspects in different ways. People had the clever idea that “if this expresses the development of our consciousness, then maybe we can use it to predict things” …
Yet the Tarot is originally and primarily not a tool for “fortune telling.” It is a tool to discover and understand the development of human consciousness, collectively and individually, on the path of incarnation in a body, in this world and further towards liberation into pure divinity, into oneness.


The Raider White Tarot Deck in Tibetan Pulsing
There is a Tarot deck with a rather innocent, childlike picture language which makes it easy to recognise the inner experience once the sequence is revealed. That is the deck of Raider White.
Tibetan Pulsing has chosen this deck to illustrate the nervous system and what I call its “Inner Play-Rooms”. It illustrates the “role we play in this life”. The pictures mirror and reflect what is programmed in our nervous system in terms of basic attitudes, perception, emotion, feeling and psyche. As a template, those pictures embrace and reflect the human nature across cultural, personal or religious back grounds. Each of the cards takes a certain place on our map of Tibetan Pulsing Iridology (Eye-Reading). What is known as the Major Arcanum is expressed in the nervous system through the Yang Energy. What we experience as our emotional world is illustrated in the Minor Arcanum and the Face Cards and expresses as our feminine, Yin energy.

This sacred knowledge lives IN YOU.
It is as ancient as it is modern and highly entertaining. Come and discover !

The wisdom lives in you, ready to be revealed

We do an online Eye Reading with Tibetan Pulsing Iridology when you send us good quality eye photos of your eyes. It is possible to get good results with your smart phone. look for instructions on YouTube.

The reading happens in Zoom.  Book an Appointment

An Online Eye-Reading needs good quality photos of both your eyes:
The whole eye is visible, the apple and iris. The eye is looking straight ahead directly to the camera. Also "the White" in the eye is important for our analysis, not only the iris. This example eye you see here is a left eye which you can identify at the "corners" and see where the nose would be (on the left).